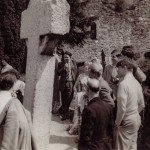 Bob was born in County Meath in 1938. He began his academic life in 1957 studying history at Trinity College, Dublin (TCD).

After graduation in 1961, Bob began research on the Ulster plantation in the Counties of Armagh and Cavan, 1608–41. This active interest in the plantation, and early modern Irish history generally, was to dominate his life and he was subsequently awarded the degree of MLitt by TCD for his research in 1969. He also contributed well received essays to all the published volumes of the History and Society series.

Bob’s contact with Derry began in 1963 when he was appointed Assistant Lecturer in history at Magee College. His teaching expanded with the takeovers and changes in Magee’s fortunes after the mid-1960s with Coleraine and Derry courses in Irish history in the early modern period attracting large numbers of students and thus making himself a victim of his own popularity. When his economic fortunes were transformed with the sale of his land in Ashbourne inherited from his parents, early benefactors included the Derry and Raphoe Diocesan Library and he actively served on the board for the project.

Bob died in Derry in September 2007. His funeral service in St Columb’s Cathedral was attended by an exceptionally large crowd of colleagues, former students and friends.