Home / About R.J. Hunter / Tributes / A Tribute by George Matthews

A Tribute by George Matthews 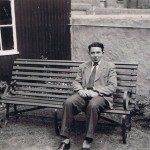 Returning to Wesley after Summer Vacation, September 1951 saw new faces entering the school. It was a new era as form 1 was to be a new venture.

During the Christmas term one lad stood out special to me, I learned he lived in Ashbourne some 14 miles from Dublin. He boarded his bus from Astons Quay at 5:30pm spending time in the reading room of the YMCA in Middle Abbey St. This was fine on four days of the week, school bell was sounded at 3pm, but Wednesday – 1pm and Saturday 12:15pm, no dinner being available. When this was related to my mother the seeds of a friendship were sown. I was requested to ask Robert to have lunch on Saturday, but later also Wednesday, so the friendship began to mature.

Every day we met at the gate of the school and walked down Grafton St, West Moreland St, O’Connell Bridge/Street, turning right into Middle Abbey St, thence to the reading room. In Robert’s case study took place on four days, the other two a number 10 bus was used to get Robert and I to Phibsboro to my home for lunch. On these days the Carrickmacross bus collected Robert from Doyles Corner.

I was invited to the Hunter home many times but 14 miles on a bicycle was something for considerable thought. As the summer term was concluding Robert’s mother – Mrs Hunter, a lady of small stature, came to my home and implored me to visit Ashbourne. I agreed to do this.

Early one morning I went on the 14 mile journey to Ashbourne. When I arrived at the gate the lane to the house was ¼ of a mile long – very rough, gravel tracks and high hedges. On my way I asked myself was there a house here at all? Eventually I saw a small white wall. I was there. I was in Co. Meath in the Hunter home. Robert’s father was an elderly gentleman. Walking with two sticks after an accident driving cattle from Lucan to Dublin Cattle Market where he was struck by a motor car. What a welcome I received in this country home.

The farm consisted of the home building. Kitchen with open fire. Pump in the yard to supply water which after use was disposed off in the farm yard. Lighting by oil lamp. After some difficulty, electricity eventually came to the home. The condition was very archaic. No luxuries whatsoever.

Outside was a farmyard with out housing for various purposes, farm implements of all kinds, meal house, cart house, hen house, etc. Off the main yard was an apple orchard and rick yard for storage of large hay and straw cocks for winter feeding and bedding for horse and cattle.

The farm was some 114 acres, used for cattle fattening ready for market. Movement over the farm was by horse and hay shifter. This was a low type of cart. A type used for hay collection, low to the ground so that Mr Hunter could sit easily to go round and inspect the cattle every day. There was a horse drawn trap which was used to travel to Ratoath on Sunday to attend Church.

A day in Ashbourne started by a call usually from the parent of Robert about 6:30 am as the lane had to be walked in all weather conditions to catch the bus from Ashbourne at 8:00 am to get to Dublin and thence to Wesley at St Stephen’s Green.

There were various interests taken up on the way from school. Just to make mention of one, Robert called at every travel agent on route to the YMCA and amassed a huge collection of travel leaflets. The only ‘entertainment’ at the home was a battery operated radio which was used at 6:45 pm each day to listen to the Archers, after which Robert commenced intense study.

The horse and whatever it pulled was the only means of transport. Occasionally a taxi was hired. Not even a bicycle. I thought Robert should have a bicycle so obtained one requiring some work for £4. In the garage at the rear of my home this Raleigh Bicycle was prepared for Robert. Robert was studying in Trinity and occasionally used to travel to Dublin on the bicycle, one morning having an accident and obtaining an injury which he had all his life.

In 1956 I obtained a driving licence for a motor cycle and purchased same for £55. Robert and I travelled on this occasionally to Ashbourne. When television came to Co. Meath, he and I went to Slane to view for the first time TV in a shop. When we got to the shop – it was closed.

I used to spend some weekends and even months staying in Ashbourne, of which much could be said. Sunday was a little different as we attended worship in Rotoath Church travelling by horse and trap. The morning worship was carried out with about 4 or 5 people in attendance. At Easter on the Sunday Robert and I went by motor cycle on the Hill of Tara to attend an open air service.

At no time in Robert’s life did study not have a major role. When I left Wesley in June 1956 Robert took part in many school functions, Dramatic Society being one and playing Rugby at Bloomfield.

From his leaving certificate results, he was awarded a scholarship from the Church of Ireland with two conditions. When he graduated he must teach in the CoI school for three years and in Ireland for five. In his first year in Trinity he was again awarded a scholarship which enabled him to have everything – education and rooms free to gain his degree.

I was in attendance with Robert for various functions in Trinity such as debates, etc which he really enjoyed, getting quite excited when taking part.

It was my custom to spend holiday in Lurgan and having obtained a new motorcycle, Robert was invited to come to Lurgan and we travelled many miles over the countryside. The following year I had an Austin A35 car and again Robert came to Lurgan for 6 days. On one particular day we drove to Cookstown to visit Loughry Agricultural College. The principal came from Sligo, the son of a farmer who knew Robert’s father. In the afternoon, from Loughry, a phone call was made to Sligo and we were invited to go to the home of the principal of the college, where we stayed for the night. The next morning a short debate was taken up [with] whether to go home or travel to Bandon where Mrs Hunter was brought up. The decision was taken to go to Brandon. Again we received a most cordial welcome. The following day we returned to Lurgan, covering 315 miles in total.

After this Robert became more involved with life in Trinity and our times together grew less frequent. My folks and I visited Mr and Mrs Hunter from time to time and were acquainted with Robert’s situation regarding his time at Trinity. When he graduated he immediately commenced as a junior lecturer in History in universities in England. He didn’t teach one day in any school and accordingly was required by C of I authorities to return his scholarship award of approx £500, which caused much anxiety to Mrs Hunter. Later I learned that a Thesis on the Ulster Plantation had been completed by Robert by which he was awarded his Ph.D. He obtained a position as junior lecturer in Colraine University.

Unfortunately the chapter ended at this time except for one never to be forgotten experience. I do not remember the actual date, possibly in the early 60’s but on arrival to the yard adjacent to my home in Lurgan there was a green Morris Minor car with a canvas roof, Robert driving. Mr and Mrs Hunter his passengers. It was real joy to welcome them to Lurgan. Sadly that was the last occasion I had the joy of meeting them.