Home / About R.J. Hunter / Tributes / A Tribute by Brigid Philip

A Tribute by Brigid Philip 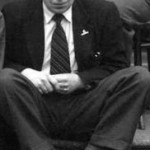 I remember Robert so well from my early days in TCD (1960–1964). As a post graduate he was at work on a vast amount of material about the plantation ofUlster. He was looking for help with understanding and transcribing information from the plantation maps in the Long Room of the TCD Library, a fascinating place to work.

I was a new undergrad studying physics. He asked me to help him with the maps as he said it was a two person job, and he needed someone of a scientific bent. The books were huge, leather bound, heavy, smelling rather musty, hand coloured drawings. I helped him when I had time and found him wonderful company. Often the townlands were out of place, oddly named, and we worried over the appropriate interpretation together. We also went to the Law Courts on the Liffey where there were more land records, lists, and maps. It was very cold, but there was an open turf fire which pickled us all, including the books and records, with the familiar smell of peat smoke! It can’t have done the records much good! The turf was not brickets but the genuine unprocessed sod from the bog. Maybe that was the winter of 1962/3 as it was desperately cold.

He was always very kind, sociable, and available for chats on topics great and small. He told me about cycling to lessons with his books propped up on the handlebars in front of him so he could study as he hurtled down hill against a stiff wind on his way. From George’s account it seems he didn’t have a bike at school so I wonder if it was to TCD in the early days, or was it for an exam? He gave a very vivid picture of the whole exacting, terrifying business, which he explained came about because his family was poor. He was very aware of the huge difference between his circumstances and those of most TCD undergrads, but he was totally unfazed by it.

He also told how his mother worked for Lily and Lolly Yeats as a young woman, as a skivvy he said! He was obviously very intrigued [as to] what on earth his mother made of the experience. He looked to see if she was mentioned in any of the biographies but sadly she wasn’t.

I lost touch with Robert after college, but re-established contact in 2004 through a fellow TCD scholar of his, Jenny Greenleaves. My husband Mike consulted him on my North of Ireland family history, and in return helped him with his many projects. Particularly he helped trace obscure details about the first 200 Ulstersettler families. Robert was researching whether the received myths, about who the settlers were, were true and found that the truth was far more complex than he had been taught. He sent Mike pieces of paper with second or new thoughts scrawled over them at various angles in tiny neat writing to be followed up. Mike being a mathematician was very frustrated that Robert didn’t have a computer, and that his train of thought was not linear! Robert drove down to meet us when we were staying with Jennifer Flegg (née Condell) in Dublinin May 2006 so that they could chat over the history issues discovered face to face. He said he relied on his daughter Laura in Australiato do all the computery he needed! As ever he had us in stitches relating details of the minutiae of his life, students, and research. He told us of his collection of 300 Churchof IrelandSunday school texts circa 1900 which will be historic he felt, and praised Jennifer for giving footnotes in her book The French School, Bray 1864–1966. He was delighted to receive that book shortly before he died.

Robert had such a way with words, a great sense of humour and a beautiful spell binding voice. He is much missed.